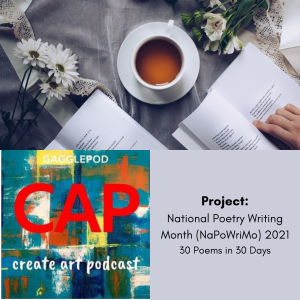 Hello friend, I am Timothy Kimo Brien, head instigator at Create Art Podcast where we help you to tame the inner critic and create more than we consume. Every year in April National Poetry Writing Month occurs, this is a challenge to write 30 poems in 30 days and comes from the NaPoWriMo site. When you participate you are given a prompt every day for 30 days and you can choose to follow the prompt or not. Each prompt has a commentary with it and a style of poetry that you may not be familiar with. I enjoy it because it stretches my creative muscles and helps me organize my thoughts. I also really enjoy a good challenge. There is also an opportunity to read other people’s work as they post on their websites and for you to comment on their work, giving them encouragement or offering a suggestion. Care to join me on this journey?

Our (optional) prompt for the day is to write a poem in the form of a “to-do list.” The fun of this prompt is to make it the “to-do list” of an unusual person or character. For example, what’s on the Tooth Fairy’s to-do list? Or on the to-do list of Genghis Khan? Of a housefly? Your list can be a mix of extremely boring things and wild things. For example, maybe Santa Claus needs to order his elves to make 7 million animatronic Baby Yoda dolls, to have his hat dry-cleaned to get off all the soot it picked up last December, and to get his head electrician to change out the sparkplugs on Rudolph’s nose.

The coffee percolates and sputters

As it fills the carafe

The promise of bitterness permeates the room

As he opens his eyes

The sun is about to rise

But its still too dark

to see much out his window

Turning on the phone

And awaiting the avalanche of messages

To arrive in his inbox

You’d think that if he took a straight job

There would be a rule against

Pilling on the work so early in the day

But then wearing a starched shirt

And an alligator belt

Has never been his style

Eyes still recovering from the dream

That he had to leave

In order to get a jump

On the ever frantic day

You owe them something

Just because they have the cash to part with

And you have the supplies they can’t live without

Doesn’t mean you are their man servant

He looks with bleary eyes

Wiping the sand from last nights

And stares at the blank pages

Of the nondescript calendar

Figuring out the day of the week

He then focuses on his memory

And the entries are filled

Only visible to him

Never write down a name

The messages flood in

Most marked as urgent

Coming from those who don’t know

How to handle their addictions

And need to find another habit

Dad has the most

His most frantic and wealthiest customer

But it isn’t his Dad

He cut ties with his father years ago

And Dad, well who knows if he actually has a father

So he pours through the 23 messages since midnight

And determines how much product to obtain

The route to take

And what to take for protection

The rest of the messages he prioritizes

Like an analyst receiving end of  fourth quarter reports

For a Fortune 500 global corporation

In an hour he has his deliveries planned

And approximate drama level for each customer

Then he dons the uniform

No color to attract attention

Dark grey, blue and black all look the same

Three different caps in the car between trips

With no logos will ensure that no one will remember

He is ghosting in public

He is everyone and no one

He reviews his customers requests

And sorts out the product

With a little extra if they want a small party

Or a taste test

That costs extra unless you are a gold card member

in the three different wallets

and he sets out ready to deliver

all day and most of the night

Overtime will not be paid

As he finishes with Dad

Who has just turned narc

The knife slices through the artery

And he dashes through the nearest window

Out onto the street

As he ditches the stolen car

For the nearest subway

He noted on his way up to the apartment

The competition didn’t catch him again

But this is not a win

So he heads to the brain trust

To decide who else has turned

Losing out on today’s scores

Will not break the bank

And in less than a week

Someone else will take the mantle of Dad