I started writing poetry in 1988 after I had been exposed to T.S. Elliot in my honors English class in high school. In 1992 I started reading my poetry publicly at Espresso Europia Coffee Shop in Abilene Tx while I was in the United States Air Force. This continued for many years when I ran my own poetry reading at Cannova’s in Loves Park Illinois and attended the poetry slams at The Green Mill in Chicago Illinois. While living in Rockford Illinois I published my first book of poetry Throwing Yourself at the Ground and Missing in 2007 followed by Postcards From Someone You Don’t Know in 2008 Wisdom From the Sack in 2010 and Shaving Crop Circles In My Chest Hair in 2017. You can get copies of all of these books in my merch section. In 2009 I started participating in National Poetry Writing Month which became the basis for my book Wisdom From the Sack and Shaving Crop Circles in My Chest Hair. In 2020 I started publishing my podcast version of the challenge and those can be viewed here for 2020 and here for 2021.

Today, I’d like to challenge you to channel your inner gumshoe, and write a poem in which you describe something with a hard-boiled simile. Feel free to use just one, or try to go for broke and stuff your poem with similes till it’s . . . as dense as bread baked by a plumber, as round as the eyes of a girl who wants you to think she’s never heard such language, and as easy to miss as a brass band in a cathedral.

The Donkey In Me

I seek the solitude of being an uncool kid

Knowing what it is doing to my body

Not caring for the smell it leaves behind

Hiding my breath in mints and gum

When my parents did it

I didn’t want to give them a kiss

Because of the stench

And here I am

Being as stupid as a jack ass

Because I am too scared

To lose my pacifier

I find myself wishing for the past some days

Misremembering that the old times were not the good times

And making the same mistakes in life

Thinking it will work this time

Waiting for the time it changes

I try to climb a mountain

But I am not a billy goat

My hooves weren’t made for these stones

The one thing I know to do is push forward

Even if the load is too much

Looking at the carrot

But not looking closely to see the rot

Thinking the goal is what will bring happiness

When I don’t know where to find the goal

I am as stubborn as a mule

And I thought that used to be a good quality

But being unbending is not what the great ones taught us

But my long hair filled ears

Didn’t catch what was actually said 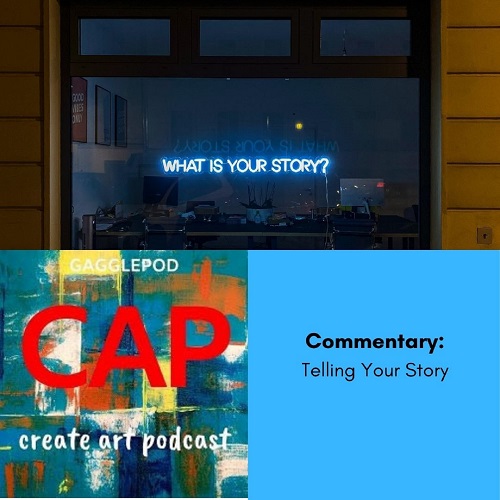 Commentary on the importance of telling your story in order to touch your audience and ways to effectively do it.[...]