Conversations On Community with Mike Porter 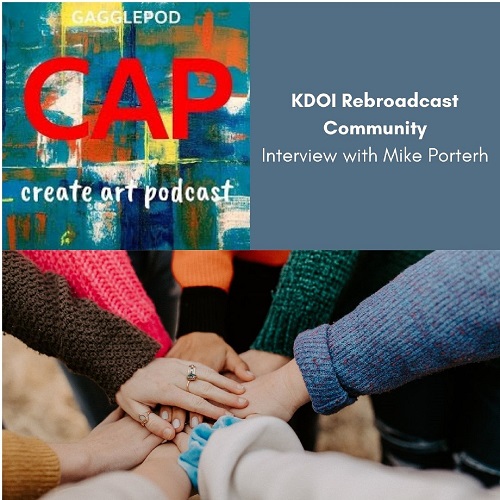 In this episode, I speak with Mike Porter, my comic book store guy about how community impacts artists and the need to build a community around yourself. Although Mike didn’t think of himself as an artist, I thought it was important to have him speak about the impact of community on his business and practice as a shop owner and burgeoning writer.

Hello friend, this is Timothy Kimo Brien your head instigator at Create Art Podcast where I bring my 20 years in art and education to help you tame your inner critic and create more than you consume. In 2022 I am rebroadcasting my former podcast KDOI Podcast here so you can catch up on what we have been doing for the past 4 years. KDOI Podcast was my first serious attempt at podcasting after spending many years just creating content without regard to the final product. KDOI started in 2016 and had 3 seasons until I closed it down in 2019. I wanted to make sure that these gems didn’t get relegated to my external hard drives, so here you go, there will be interviews, commentary, and projects that you can do for yourself. Enjoy these rebroadcasts and Create More Than You Consume. This episode is about the novel, so enjoy.

a unified body of individuals, the people with common interests living in a particular area. A group of people with a common characteristic or interest living together within a larger society, a body of persons of common and especially professional interests scattered throughout a larger society, a body of persons or nations having a common history or a common social economic and political interests.
A group linked by a common policy, joint ownership, or participation social activity,

Transcripts of the show

KDOI Rebroadcast Conversations On Community with Mike Porter
Tim: Create art podcast. KDOI rebroadcast conversations on community with like Porter. Hello friends. This is Timothy Kimo. Brian, your head instigator for create art podcast where I use my twenty years. Plus. From my experiences in the arts and education world to help you tame your inner critic and create more than you consume.
Now, a few years ago, I used to run a podcast called K D O I podcasts, which stood for Kimo’s den of iniquity. I closed down that podcast and started up create art podcast because I felt. That is a better way to communicate to you what this podcast is about. So in 2022, I’ll be rebroadcasting season three of Katie or podcasting.
Now for this episode, I’ll be talking with Mike Porter and we’re going to be discussing community. And in each of these episodes, I start off with the definition of community and then two quotes. And then I talked to my guest to see what their opinion is on that topic. So I hope you enjoy.
Welcome back friends. Welcome to KDOI podcasting Kimo’s den of iniquity, where we create more than we consume. I am your head instigator, Timothy Kimo, Brian, many times creating art is done in an imposed isolation or away from our audience. When we do that, we can often feel like we’re the only person doing the art we are doing.
And we may never find our intended audience. It’s important to find our community, to learn, to challenge and to inspire our creativity. I never went to conferences while in college, but since I left academia, I’ve gone to three conferences in two years about podcasting. Now, each time. The other weirdos that do what I do.
I have a sense of family that I’m not the only crazy one out there doing this. It makes me want to push through blockages and create more. Now let’s listen to what Merriam Webster says, a unified body of individuals, the people with common interests living in a particular area. A group of people with a common characteristic or interest living together within a larger society, a body of persons of common and especially professional interests scattered throughout a larger society, a body of persons or nations having a common history or a common social economic and political interests.
A group linked by a common policy, joint ownership, or participation social activity, our quotes come from Goethe or girthy. However, you’d like to pronounce his name. The world is so empty. If one thinks only of mountains, rivers, and cities, but to know someone who thinks feels with us and who through distance and who though distance is close to us in spirit, this makes the earth for us and in the inhabited.
We also have Fred Rogers, Mr. Rogers, to the most of us, we live in a world in which we need to share responsibility. It is easy to say it’s not my child at my community, not my world, not my problem. Then there are those who see the need and respond. I consider those people. My heroes Guthy was a German writer in state.
Is works, include four novels, epic and lyric poetry, prose, verse dramas, memoirs, autobiography, literary, and aesthetic criticism, and true to seize on botany and anatomy and color. Fred Rogers, otherwise known as Mr. Rogers was an American television personality, musician, puppeteer writer, producer, and I didn’t know this Presbyterian minister.
Dictionary definition was very long-winded. But what really spoke to me was body of persons of common and a specifically professional interests scattered throughout through a larger society. You know, we have shared interest in our exploration in inter interpretation of art. Yes, we are all over the world and we can always find a kindred soul that.
For me, you can’t go wrong with Fred Rogers. We do have a shared responsibility and isn’t it great to know that we can help each other out. In fact, many artists I know are only too happy to help other artists out with supplies or a space to express themselves. Just like I’m doing here today. So let’s get this conversation started.

Mike Porter: making off of your art. Do you consider yourself a professional artist?

Mike Porter: wise, unless you’re a dual citizen and you’re living in Australia, in which case it’s whatever their tax codes is.

Mike Porter: American?
Because that is the amount 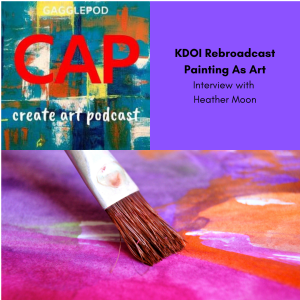 A rebroadcast of my old show KDOI Podcasting. Heather Moon discusses her practice of painting in expressing her art. [...] 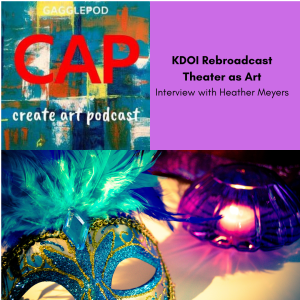 A rebroadcast of my old show KDOI Podcasting. Heather Meyers talks about her experience with theater as an expression of[...] 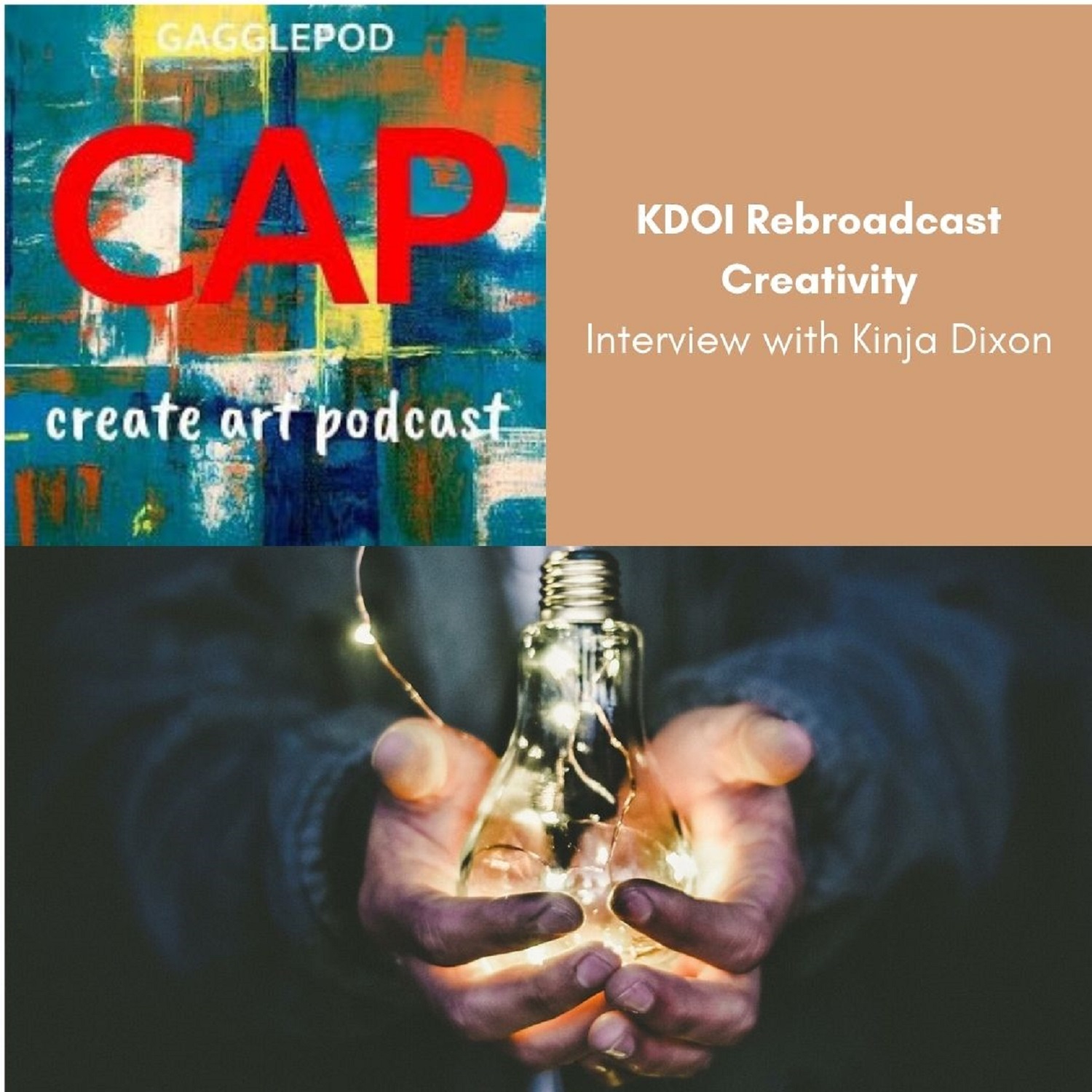 Discussion on Creativity with Kinja Dixon on my old podcast KDOI Podcast. Talking about what i takes to be[...]