WRITING AND PODCASTING A NOVEL 7 NOV 2020

“Coffee shop it is, and before you ask, they have vegan and vegetarian options for you. Are you planning on staying in town tonight or heading back after some grub,” Carl asked?

“Are you inviting me to stay and watch over you tonight,” asked Nate?

“Well, the luxurious accommodations here are not up to your standard I am sure, but I do have the two spare bedrooms, although one of them is set up for my office. You can crash here if you want,” said Carl.

“Let’s grab lunch and see how I am feeling. So where is this coffee shop you are taking me to,” asked Nate?

“Just a few minutes down the road, I did promise to help Cheryl with her dialogue for a class project she is doing today, do you want to lend a hand with that? Lord knows we can talk for hours about nothing important,” Carl asked?

“So, who is this Cheryl, is something going on that I should be aware of in case she tries to get in on your estate,” asked Nate?

“Not everyone is out for the little bit of money I have. She is a barista at the coffee shop and is taking classes in theater at the college. She is a good kid wants to be a lighting designer and I am just giving her a hand with the stuff that I know,” replied Carl.

They both got into Nate’s car and drove off to the coffeeshop. It was a quiet and quick drive, however, they had to park a few blocks away as the lunch crowd had swarmed as Carl feared it would.

“Wow this little place is hoping, must have some great food huh,” said Nate.

“It’s the lunch crowd, they should clear out in about 20 minutes or so, do you want to go someplace else,” asked Carl?

“No, this will be fine, you said they have vegan food, right? So, let’s eat healthy,” said Nate.

The line to get in spilled out onto the sidewalk. Nate feared there might now be enough food when they ordered as had happened to him in the past with popular eateries. Neither brother talked while in line, they smiled at the other patrons, but didn’t engage in any conversation. Once they finally got to the counter to order Nate had memorized the menu and Carl was a regular, so his mind as made up before they even entered.

“This will be for here, I’ll take the Rueben with sweet potato fries and a red eye and this guy is with me and he is paying,” said Carl to Cheryl’s coworker Stephanie.

“Oh hey Carl, Cheryl is swamped, but we are winding down on the lunch rush, she wanted me to let her know when you came back, you look great, is this your father with you,” said Stephanie with a giggle?

“This old man is my older brother Nate; he is the vegan in the family. He keeps the world in balance with all the chaos and destruction I bring into it. No worries on it being busy, we will be outside in the back at the tables. Just holler at me and I will grab the tray,” said Carl.

“Did you tell her to say that” asked Nate?

“Standing order here, any male that comes in with me is my dad, any female is my younger sister. E perks of being a good customer and big tipper, by the way, minimum tip I give is thirty percent. Cough it up big guy,” said Carl.

Nate paid the bill with a forty percent tip. Carl always talked about the coffee shop as if he were a financial backer or a silent partner. It was everything that Carl described, comfortable, personable staff, lots of art and very lively. After being there for five minutes, Nate understood why Carl enjoyed the place, it felt like Carl was inviting him to his private island. They grabbed a small table on the back open-air patio. It felt very private and exclusive being so close to downtown. Nate made note of the location for future client meetings. It felt good to see his little brother be treated like royalty, and he knew it would never go to his head.

“So how is the legal business, keeping criminals like me on the street,” asked Carl?

“Business is always good, putting in seventy-hour weeks is tough, but I’ll be able to cut back to fifty-hour weeks soon. We took on a new partner with the firm and she will be working out custody cases. She is a real firebrand, and you know those custody cases take forever and go back and forth all the time depending on the judge and the clients. Well this gal, she was doing adoption cases and jumped over to custody cases and really took off, been watching her career zoom and I told my firm, snatch her up because I am not spending all my time with custody cases. Those are emotionally draining; she has caught on quick to our firm and I am glad to hand all the cases off to her. I got the firm to offer her an extra share, “remarked Nate.

“So, she is taking your job, how are you going to live,” joked Carl.

“Yeah, funny. So, she is tackling the stuff that is holding me back from contract law, the boring stuff that no one likes but makes the bread and butter for the firm,” replied Nate.

“Carl, get your grub its ready, “called Stephanie from the door. “And your dad is a way better tipper that you ever were.”

Everyone on the patio laughed when they heard Stephanie bellow that remark. Carl got up quickly to get the food and to escape the conversation he started. He almost wished he talked about his tumor instead of asking Nate about his legal business. Carl understood all the legal terms and positions, he just was hoping Nate did not talk about work outside of work. Carl brought the food back and set it out for them as deftly as a waiter in a three Michelin Star restaurant. Years of waiting tables in college certainly helped his form. The two got down to the business of eating. Carl made sure none of the food touched each other on his plate while Nate opened the vegan wrap and put the sweet potato fries inside. While eating neither on spoke. Carl looked around the patio and noticed they had changed the wall art since he had been in the patio six months ago. The paintings were very floral and leafy as the overall theme, but the sculpture on each wall was very metallic and futuristic. He thought probably someone is doing an opposite attract motif, its didn’t sit well with him as it felt forced.

“Earth to Carl, are you spacing out on me,” asked Nate?

“Nope, just enjoying the music and looking at the art. Does it seem forced to you, the contrast between nature and the futuristic sculptures, it kinda bugs me,” said Carl.

“Well you are the art guy, or at least the appreciator of art. I would not want it in my office or the board room. I wouldn’t want it in my house either, but we don’t have a lot of art hanging up in either place, “replied Nate.

After about twenty minutes Cheryl came out and sat at the table Carl and Nate occupied. She looked ragged, but her youth seemed to push her forward.

“The best Reuban I’ve had since I moved here from Chicago,” said Carl while finishing up his red eye.

“I make the drinks, but I believe we make it certifiably vegan. Too bad this guy doesn’t eat clean food huh. It’s nice to see Carl’s father, and you move around so great for someone with a permanent corn cob up his,” joked Cheryl.

“Never mind Cheryl, that’s not him. This is my brother Nate; he runs a firm outside of town. Highly successful and very vegan,” Carl said cutting off Cheryl.

“Carl, I’m twenty-four not four. I kinda figured he wasn’t your dad, not old enough and not crabby enough,” replied Cheryl. “So, Nate, what brings you by,” asked Cheryl?

“Well this guy went off and did a doctors appointment without me. He conveniently forgot that I was requested to come with him, and I had to break into his house. Nice brother,” replied Nate.

“Yeah he doesn’t let anyone take care of him. He had an episode down here earlier today. Looks like you are feeling better right Carl,” said Cheryl?

“Thank you both for your caring but I brought Nate here to help us out with your dialogue assignment. If there is anyone I know who can talk for hours on end and say nothing, its my brother. Are we in too early,” asked Carl?

“Carl, you look as tired as I feel and you are almost twice my age. The assignment isn’t due until next week, we can do it later, besides I am just about done with my break. Enjoy your time with your brother, but get a nap in today okay,” said Cheryl.

“Yes dear, thanks for the great drinks,” said Carl.

“Cheryl, Carl said you were going to school for theater, let me know when you switch majors for a good paying job and I’ll open up a spot in my firm for you,” joked Nate.

“I’ll let you know when I need to sell my soul to a firm to pay off my student loans. You’ll be the first one I call, promise. You are just as bad as Carl. Why don’t you bring your brother here,” asked Cheryl?

“He lives out of town and is only bearable in small doses. I’ll drop by tomorrow and we can set up a time to work on that dialogue,” said Carl.

“Sounds good, you two take care, make sure he gets some rest Nate, it was nice to meet you,” replied Cheryl.

WRITING AND PODCASTING A NOVEL 25 NOV 2020 Todays Topic Welcome friend to Create Art Podcast where we create more than[...] 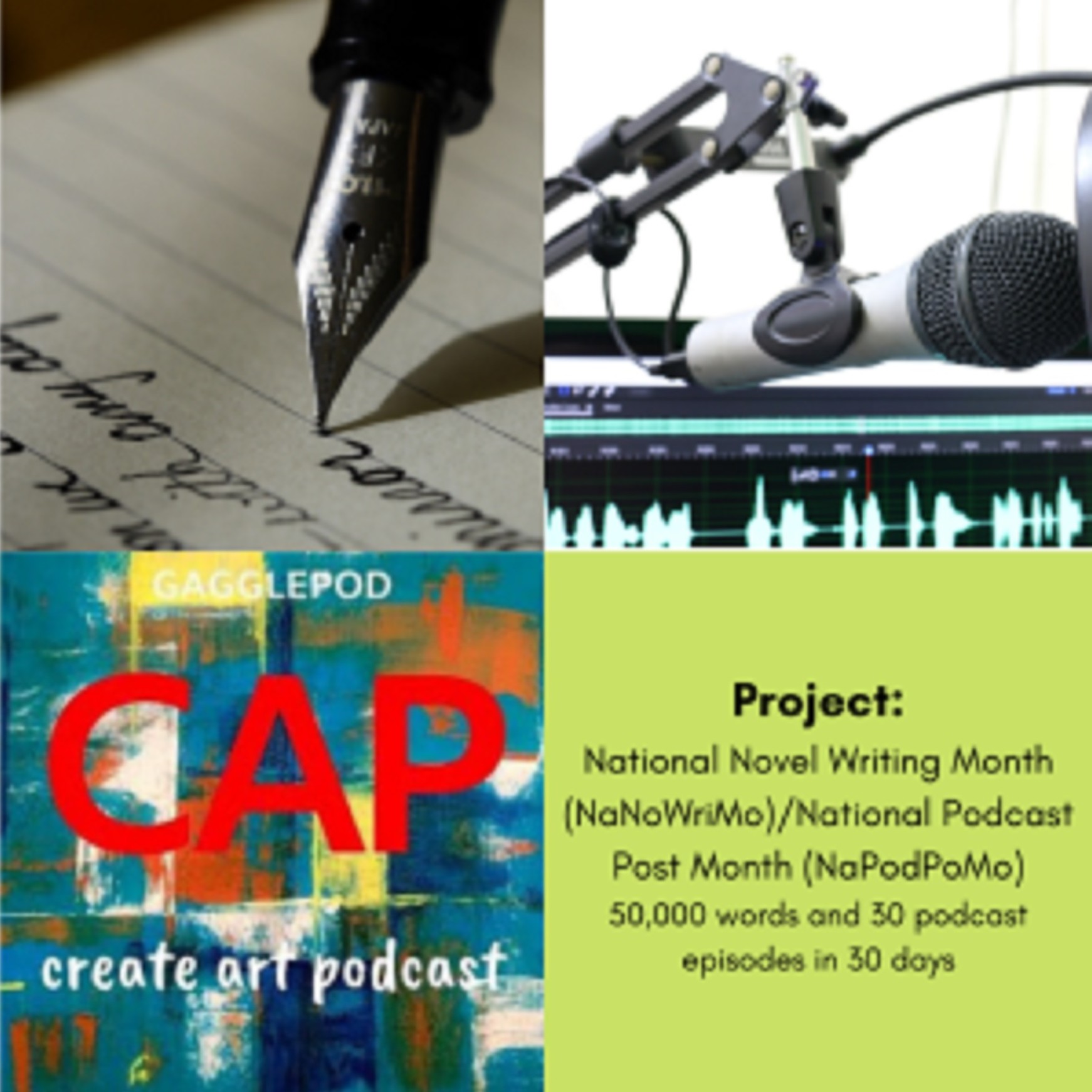 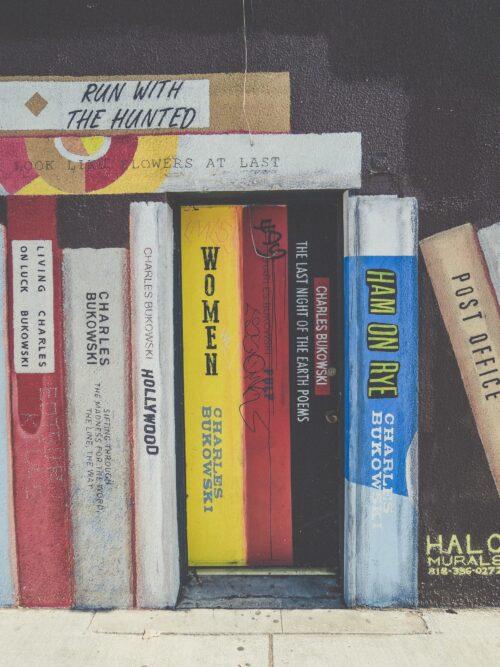 Pick and text laying around the house, a takeaway menu, old nagazine, an instruction manual, create a blackout poem using[...]